Quentin Szabo was awarded with a Forschungskredit UZH and a EMBO Fellowship. Congratulations!

Gabriele Gut has successfully pitched his plans for 4i Labs, a start-up based on the 4i technology that he developed in the lab, in front of the Venture Kick jury.

Check out the news item here.

Venture Kick allows entrepreneurs to pitch their business idea and receive useful feedback and support. Check out their approach here.

We are very proud to be part of this exciting consortium to apply our expertise in high-throughput multiplexed imaging to functional drug response profiling of patient biopsies: The Tumor Profiler Study: integrated, multi-omic, functional tumor profiling for clinical decision support

we are happy to announce that we have been awarded the ERC Advanced Grant!

Gabriele Gut has successfully pitched his plans for 4i Labs, a start-up based on the 4i technology that he developed in the lab, in front of the Venture Kick jury.

Check out the news item here.

Venture Kick allows entrepreneurs to pitch their business idea and receive useful feedback and support. Check out their approach here.

Keisuke Fujita has joined our lab as a postdoctoral fellow coming from the RIKEN institute in Kyoto.

Keisuke did his PhD at Osaka University followed by a post-doc at the RIKEN Quantitative Biology Center. He will join the Pelkmans lab in September 2019 to work on scale-crossing and multiplexing super-resolution techniques for imaging transcriptomics.

Katrina Meyer joined our lab as a postdoctoral fellow coming from the Max Delbruck Center in Berlin.

Katrina did her PhD in the group of Matthias Selbach at the MDC in Berlin on disease-causing mutations in intrinsically disordered cytosolic regions of transmembrane proteins. Check it out here. In the Pelkmanslab, Katrina will work on understanding the role of liquid-liquid unmixing in chromatin organisation and regulation.

We will participate in a seed network project for the Human Cell Atlas funded by the Chan Zuckerberg Initiative.

In collaboration with the groups of Barbara Treutlein, Gray Camp, Prisca Liberali, Smita Krishnaswamy, and Jason Spence, we will participate in a project to build a spatiotemporal atlas of a single individual’s multi-organ developmental program by applying integrated single-cell RNA-seq and 4i spatial maps to primary tissue and matched iPSC-derived organoids from the same individual.

Adrian Tschan joined the lab as a PhD student coming from the University of Zurich.

Adrian first joined the Pelkmanslab in October 2017 to carry out his master’s thesis, during which he worked on ways to quantify variability in bacteria and measured how it is affected by bacteriophage infections. He is currently working on experimental and computational approaches that might allow to cross scales in live-cell imaging and single-particle tracking.

Max Hess joined the lab as a PhD student, coming from the ETH Zurich.

Max studied Biology at ETH Zürich and recieved his Master’s degree in Neurosciences. During his master thesis he investigated the morphology of C. elegans mechanosensory neurons during aging. In the Pelkmanslab, Max will work on on establishing imaging protocols and data analysis pipelines for 3D structures. 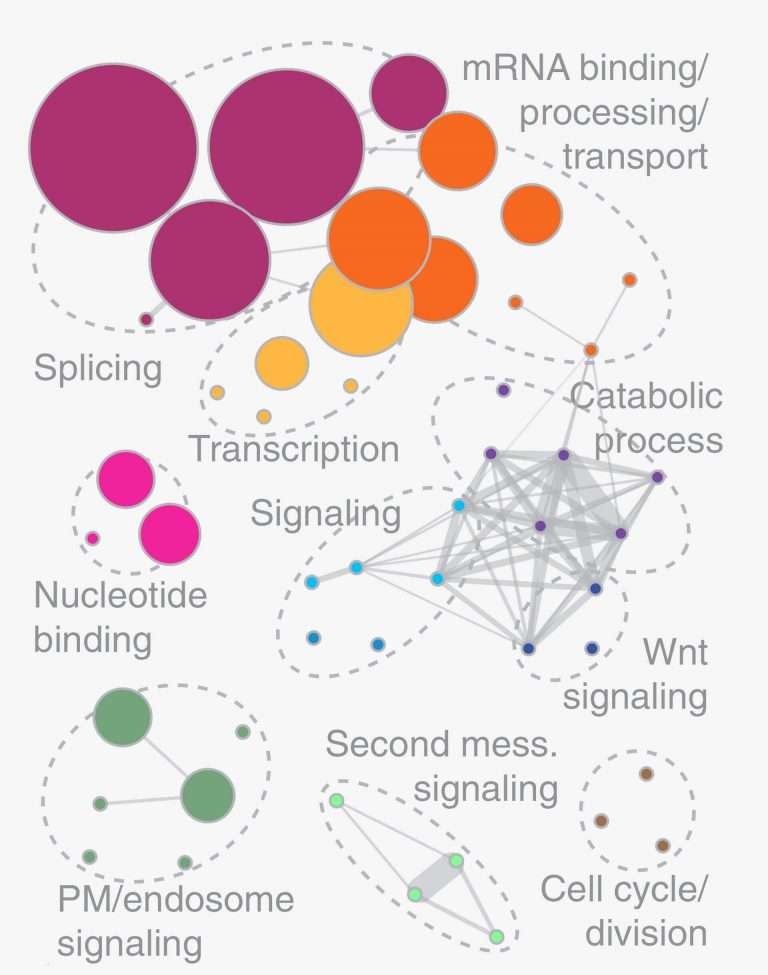 Doris Berchtold’s paper entitled ‘A systems-level study reveals regulators of membrane-less organelles in human cells’ is accepted for publication. Congratulations!!
This work performed parallel large-scale gene perturbation screens in human cells on 6 membraneless organelles, and applied advanced computer vision and multivariate analyses to quantify effects on the morphology and abundance of these organelles at the single-cell level for each of the perturbed genes. This generated an unprecedented resource for deciphering the homeostasis of these organelles, identifying specific regulators, revealing regulatory crosstalk between organelles, and for finding hierarchical interactions between membraneless organelles and the phenotypic state of cells, shining new light on their cell physiological roles. Following up on PML nuclear bodies revealed that the dual-specificity kinases HIPK1/2 control their abundance, which may be a means to regulate progression through S phase.

This work reports that correlations between mRNA and protein abundance of the same gene across thousands of single cells are often quite high, and that single cells that are outliers of such linear correlations are, moreover, the result of a gene-specific adaptation of mRNA-to-protein ratios to properties of the phenotypic state and microenvironment of individual cells. Accounting for this allows an accurate prediction of protein abundance in single cells. Using gene induction of JUN illustrates that these properties of single cells can influence mRNA-protein relationships at multiple levels in sometimes non-intuitive ways, involving adaptation of transcription, nuclear export, protein translation, and mRNA decay. Finally, the work shows that also subcellular patterns of JUN transcripts vary non-randomly between single cells and are adapted to the extent of local cell crowding, which may contribute to determining cell-to-cell variability in mRNA-to-protein ratios.

Check it out here.

Gabriele has been awarded the UZH BioEntrepreneur-Fellowship based on his project to apply 4i in precision medicine. Congratulations!!

Check it out here.

This work reports the development of iterative indirect immunofluoresence imaging (4i), which allows 40-plex immunostaining of hundreds of thousands of single cells using conventional primary and secondary antibodies in high-throughput. Combined with cellular computer vision, this generates a wealth of quantitative information about biological samples from the millimeter to the nanometer scale. It also reports a novel pixel-based computational approach that allows the unsupervised comprehensive quantification of protein sub-compartmentalization within various multicellular, cellular, and pharmacological contexts. These approaches have enormous potential for biomedicine in both fundamental research, diagnostics and personalized medicine. 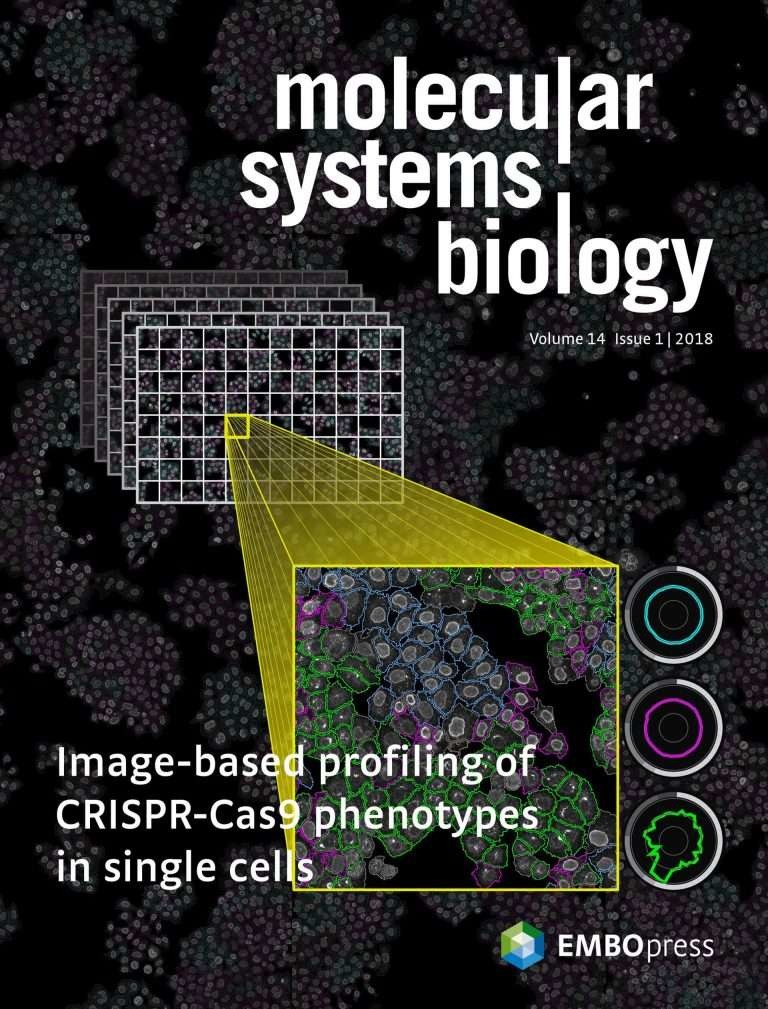 Reinoud’s paper is featured on the cover of the January 2018 issue of Molecular Systems Biology.