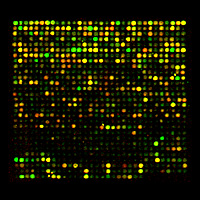 The work of his Computational Oncogenomics group is centered on the comparative analysis of genomic profiling data in cancer, with a focus on somatic copy number variations (CNV, CNA). With the Progenetix and arrayMap repositories, the group provides some of the largest reference resources of curated genomic profiling and associated metadata covering the majority of cancer types.

Apart from the analysis of cancer genome data, in recent years group members has been involved in efforts to facilitate the access to genomic data for research on a global scale. Since its founding in 2014, Michael has been a member of the Global Alliance for Genomics and Health GA4GH, currently serving in the steering committee and as co-lead of its "Discovery" workstream.

Related to the work in the Global Alliance, the group also contributes to the ELIXIR Beacon project, which develops APIs to query genomic data collections in a privacy-protecting manner. Here, the main focus on the group is in prototyping protocol extensions with demonstrator implementation in the Beacon+ project, connected to the Progenetix and arrayMap repositories. Also, the group is involved in ELIXIR’s “Human Copy Number Variation” (h-CNV) community, where Michael co-chairs efforts to harmonise technical methodologies and data resources for the better understanding of structural genome variants in rare diseases and cancer.

In the Swiss context, Michael has been involved in advising the Swiss Personalized Health Network (SPHN) initiative and previously lead its "Bioinformatics and Data Analytics" working group.