Prof. Rolf Nöthiger was a renowned developmental geneticist whose main interest lay in the genetic drivers of sex determination. Through pioneering work, he developed cross-species models. In the fruit fly Drosophila, he studied the genes that are responsible for the sexual fate decisions and determined their hierarchy.

Rolf Nöthiger liked to say that he was both a student of, as well as a teacher for, a Nobel prize winner. His stay in the lab of Ed Lewis at the California Institute of Technology (Caltech) in Pasadena, California from 1974-5 was a turning point in his research. When Eric Wieschaus spent time in Rolf’s group as a post-doc, he too was approaching a turning point in his own research; thereafter he would move to Germany to commence his seminal work with Christiane Nüsslein-Vollhard, thereby revolutionizing the world of Genetics.

The key to success were scientific exchanges. Rolf Nöthiger learned how to pose questions and engage in lively discussions under the tutelage of Ernst Hadorn, a Swiss pioneer in developmental biology. In 1964, he completed his dissertation, which focused on the differentiation potential of cells in Drosophila. During his first stay in the USA in the lab of Tuneo Yamada in Oakridge, Tennessee, he studied eye proteins in the lenses of frogs and newts. Upon moving to La Jolla, California, he would return to work with Drosophila, his favorite model organism.

Back to Zurich, Rolf obtained his venia legendi in 1971. Shortly thereafter he was awarded the title of Assistant Professor, followed by a promotion to Professor extraordinarius, and finally to full professor of Zoology in 1981 specializing in Genetics. Rolf and his team focused on the differences between males and females. In the early years, precursor cells for genitalia were analyzed leading to the finding that distinct cell groups gave rise to female and male genitalia; both female and male precursor cell populations could be identified in both sexes. In the case of intersex flies, both cell populations grew and differentiated simultaneously, giving rise to both male and female structures.

Stemming from his time in Pasadena, Rolf became increasingly interested in genetic approaches to questions of sex determination. Which genes determine sex and how do these genes act? It was known that the X chromosome was important. In addition, some autosomal mutations that led to changes in gender-specific phenotypes had also been identified. One example was the transformer gene whose disruption in XX animals gave rise to phenotypically male flies instead of female flies. How these genes work together to determine sex was, however still unknown. In the Nöthiger lab, a hierarchy was established for genes known to be involved in the process. Some of them, the so called “selector genes” that drove development down one pathway or the other, were identified. In addition to that, the search was on for X-linked genes that were responsible for differences between XX and XY animals. During this time, molecular biological methods became available to complement genetic approaches to these questions. The cloning of the transformer gene, a breakthrough accomplishment, was published in 1986. 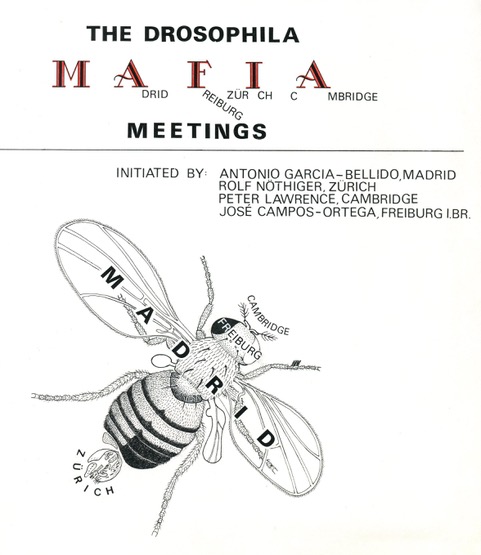 The fly community of the 1970s and 80s being relatively small, Rolf Nöthiger developed lifelong friendships that would enrich his research throughout his career. He regularly met with friends such as Antonio Garcia-Bellido, Peter Lawrence and many others, to exchange ideas. At an early meeting in Rascafría in 1976, in the hills above Madrid, the fly was divided up and each researcher chose his favorite part. Rolf requested the hind section, the part with the genitals. Lively exchanges took place at the so-called Rascafría-meetings (also known as Mafia-Meetings), which took place every one and a half years, not only in Rascafría, but in other remote locations in different countries as well. Projects and ideas were presented openly, then criticized an d commented. Hypotheses were elaborated, some to be discarded, others to be confirmed. The researchers trusted each other. It was the dawn of modern developmental genetics. Basic understanding for differentiation processes that led cells, containing identical sets of genes, to their individual fates, had yet to be defined. Soon the world would gain insight into these processes.

Rolf was very committed to supporting his students and postdoctoral researchers. Everyone, including the youngest amongst them, were to attend conferences and present their results. Lab meetings were an opportunity for practicing and asking questions until everyone felt confident. At meetings it sometimes felt daunting to approach scientists who had been made famous by their published works. Rolf had the ability to draw everyone into discussions; everyone was welcome to take part in the scientific dialogue. Furthermore, beyond small discussion groups, Rolf also captivated the attention of his students in lecture halls.

Upon retirement in 2000, Rolf was able to spend more time on his favorite pastime hunting. As a proud grandfather, he also boasted of the time he was able to spend with his grandchildren. Sadly, he was plagued with health challenges in later years that limited his activities. On October 25, 2019, he passed away quietly. We, Rolf’s students, are eternally grateful to him. We will miss his sharp intellect and his generosity.